I savor seasonal recipes, celebrate the spirit and lore of food and delve into the magic of everyday. I honor what sustains us by sharing its beauty through cooking, painting and writing. View all posts by Patricia | green tea over rice

Writing about Frau Holle felt quite intimidating to me, because there are so many legends about her. She is so full of history, has had so many names and faces, … where would I ever start! I’m currently reading not one, but two books on her (written by the infamous Heide Goettner-Abendroth, a German researcher on matriarchal societies) and I am just beginning to understand how old this deity really is and how deep her roots go – they can be found everywhere across Europe and further. I’ll have to settle with offering a glimpse of her vast history and meaning, as well as my depiction of the children’s story I grew up with … Please feel free to look deeper into her world following the recommendations in the sources section.

You might know Frau Holle by her older names Hel or Hulda and some stories tell about her as the goddess Frigg or Frau Fricke. She is the primal mother deity of the Alps and their matriarchal cults. We can find an amazing range of cult sites and traces of her worship, when we look for them! For me, this is a wonderful and important reminder that matriarchal societies, their emphasis on the collective, on sustainability and creativity (as opposed to individualism, competitiveness and destructiveness) were thriving and prospering. History wants to make us forget – or never discover – that societies who valued these traits were really existing (because … what would this mean for our current modus operandi? Who’d feel the need then, to be better looking, wealthier, younger or more important in status than the others, if it would say nothing about your value in the tribe? Where would all the businesses go, that thrive on our need and anxiety to be successful in any area of our lives?)

In Southern Germany and Austria Frau Holle used to be called the Percht. The name derives from the Old German Perahta (or Perachta), meaning “the shining one”. Some sources state, that when the church took over and prohibited the execution of pagan rites and rituals, people began to avoid saying her name out loud – and thus, the “codename” Frau Holle came into use. Many places in this region still carry her name, like the beautiful German region of Berchtesgaden (from Old German gaden meaning “seat” – the seat of the goddess Percht), an area that came to rather sad fame when it served as vacation resort and outpost of Hitler and his entourage during the Nazi-era. Within this region we can find a village called Hallertau, also often called Holledau. The central mountain chain in Berchtesgaden is called the Watzmann, that Heide Goettner-Abendroth describes as the original seat (or sometimes lap) of the goddess. Inside this seat there are seven smaller mountains called “the children of the Watzmann“. Although the popular story around this mountain is nowadays  that of a male mountain deity, Heide Goettner-Abendroth argues that these small mountains were seen as the children in the lap of the goddess in the past.

Further up, in the Northern area of Hessen, there lies the Holleteich (“pond of Holle”), a small nature refuge shrouded in legend. The pond is said to be of endless depth, and leads directly into Holle’s kingdom: A golden palace amidst a garden of flowers and herbs, vegetables and fruit – treasures that she gives liberally to women and girls. This place is also said to hold the souls of deceased children and the water of the pond was said to bring fertility to the women, who bathed in it. It’s contributing stream is called Hollenbach (Hollen-creek).

Frau Holle is – as so many others – a double-faced goddess. She might appear as a young and beautiful woman or as an old and ugly hag. She is sometimes kind and helpful, and sometimes cruel and punitive. Generally she rewards those who are good and hard-working, like in the story of Goldmarie (also known as Frau Holle), a popular children’s tale:

There was once a young and beautiful girl that went to live with her aunt and cousin after her parents had died. Her new family was cruel towards her and she had to do all the work in an around the house. She did all of it to the best of her abilities and without ever complaining, as she was diligent and modest. Her cousin, on the contrary, was a spoiled and lazy girl and all she and her mother did all day, was plotting how to make their new family member even more miserable … and how to find the best deal of a husband for the lazy girl, so she would never have to move a finger.

One day a prince came to the village and announced, that he would take for his wife whoever was capable of spinning the finest yarn. The lazy girl tried her luck on the spinning wheel, but it soon was clear that she was too clumsy to spin the thread. Her mother ordered the good girl to spin in her stead, which she accomplished in no time. When she had finished spinning the wool, she sat down by the well with the spindle in her hand, dreaming of a better life, of living in a castle and of a loving family. Suddenly, the spindle fell from her hand and into the well! In panic, she jumped after it and fell down and down and further down.

When she awoke, she found herself on a beautiful field of flowers, but she heard a moaning in the distance. She got up and went to find what was causing the miserable groan and soon found an apple tree, full of ripe apples, the branches aching and close to breaking under their weight. “Shake me” said the apple tree, “I cannot bear the weight any longer”. So the good girl shook the tree and freed it from its burden. Then she went on and found an old wooden stove. “The bread is close to burning” said the oven, “please remove it before it’s too late!” So the good girl took the ladle and removed the fragrant loaves from the oven. As she kept walking, she saw a cow standing in the the field, its udders tense and full of milk. “Milk me” said the cow “I’m in pain”. So the girl took a bucket and milked the cow until she was relieved. Suddenly a tall old woman stood in front of her. “You have a kind heart and have proven diligent, you can stay and I will take you as my apprentice”.

So the girl stayed in the realm of Frau Holle, helping her in the house and learning the craft of making the weather. Each day Frau Holle asked her to shake out her blankets, which we all know makes it snow on earth! After a year had passed Frau Holle said: “It is time for you to return to your home” and the girl was happy, because she had been feeling homesick in the recent days. In order to go back to the human world, Frau Holle had the girl walk through an archway. When she stepped underneath  golden coins were raining down on her, sticking to her dress and her hair. Frau Holle gave her back the spindle and the girl saw that the yarn was now made of gold.

She was surprised to find that only one day had gone by since she had fallen into the well. And so it was that she arrived just when the prince came to pick his bride. Seeing the beautiful girl, dressed in gold and carrying the golden spindle, he quickly made his choice (who wouldn’t) and they lived happily ever after.

The lazy girl however, listens to the young girl’s story and decides to jump down the well to get the treasure. Of course she refuses to help the apple tree, the oven and the cow and although she is taken in as an apprentice by Frau Holle anyway, she continues to be lazy and arrogant. In the end she steps underneath the magical archway, and tar rains down on her … sticking to her for the rest of her life.

This classic fairytale clearly sells domestic values to young girls and women … but we can find some important characteristics of the goddess Frau Holle. In the form of an old lady she offers her home in the otherworld to a woman in need, she is responsible for making the weather (as so typical for mountain goddesses) and she rewards those who help her and work in accordance with her. In other, older stories of the Percht, she often asks humans to honour and protect her realm, to respect the creatures that live in it and treat them well. She rewards those who oblige and punishes those who misbehave.

The two girls – one beautiful and good, the other ugly and mean – might as well be a relic of the image of a two-faced goddess. And of course the spindle as a symbol of the spinning godess – who spins, measures and cuts the thread of life in her threefold appearance is woven into this fairytale too.

Lastly, I’d like to mention the connection between the the eldertree and the goddess. Frau Holle has always been associated with the magical elder tree and indeed, in the German language the elder is called “Holunder”. The elder tree, as a threshold plant between this world and the otherworld, has been seen as ambigous in character as the goddess herself. In the Austrian dialect the elder is often called “Holler”, which makes the connection even more obvious.

When I was a child the fragrant and delicate white blossoms of the elder always reminded me of snowflakes … and so the association with Frau Holle, who makes it snow on earth, was a completely logical conclusion. 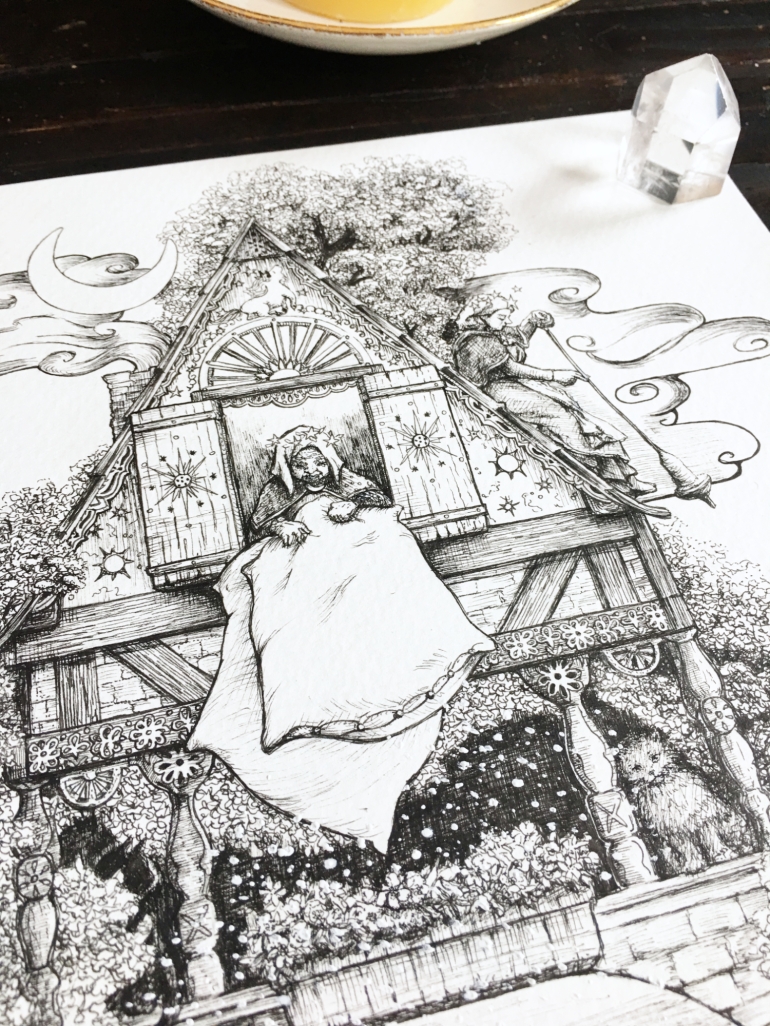 Interview with Heide Goettner-Abendroth on her career and research, as well as matriarchal societies and what we can learn from them (English subtitles)

Bilingual blog of the feminist writer Luisa Francia, her work focuses on the exploration of goddesses and feminism (among so many other things). Find the blog when you click on “Tagebuch” (diary). This journal is always worth to check on for her on-point messages.