(Für die deutsche Version hier klicken / click here for the German version)
(Jump to recipe)
With fresh yeast suddenly being sold out everywhere and sourdough tutorials popping up all over social media due to people spending more time at home, I thought I add my two cents on this topic. Bread making has become my weekly ritual, my personal meditation and regular grounding practise.
To me, making a loaf of bread was never about that incredible fluffiness, the perfect crumb or the most impressive appearance – and I don’t mean to downplay the artistry of baking by any means. I watch in awe all those who dedicate themselves to perfecting the art of bread making … it’s just that I see making bread as something way more basic.

A loaf of homemade bread nourishes us in so many ways:

1. It’s an ancient craft and a basic necessity: When baking, I feel connected to the line of humans that came before me. It’s really more of a physical experience than a state of mind – I don’t imagine or visualise things, instead my body just feels “right” when doing it. I can instantly feel my breath and my feet on the ground, I work the dough and am satisfied.

2. By being in this state of presence you put time, love and good wishes into your dough – and the loaf keeps giving those things back to you all week.

3. I feel focused when measuring out the ingredients, I relax when stirring them together. These few minutes always lift me out of how I experience my day and the passing of time, onto a separate plane where I feel in communion.

4. Sourdough comes into existence when you mix flour and water and the yeasts & bacteria that are present in the air around you at all times settle in it. They make it their home and bring life into the substance. Life that is beneficial for our bodies and that persists even after baking at high temperatures. It is such a beautiful reminder that we are breathing life all the time, we just cannot see it … unless it settles in the floury home we created and thus, enunciated an invitation. This is relationship with our immediate surroundings. And sheer magic.

5. Working with a sourdough culture that you keep on feeding and reusing builds a connection between you and the beneficial folks in your starter. I truly think they can sense me and I find I literally sense them by using my senses: I see and smell how they are doing, I hear the bubble and and I feel the consistency.

By the way: I never discard any starter, as so many tutorials recommend. It feels like pouring a couple of your pets down the drain. Never mind the waste of flour. There are a million ways to use up excess sourdough starter (and old bread too).

6. The results are changeable. Even if you do everything the same way you did last week, your bread will be different every week. All the components – ingredients, starter, water, weather, moon and you – will create a unique loaf each time.

7. Everybody can do it. Roughly using the right ratios, the ingredients that you feel are right for you – like the choice of flour, the type of milling, spices, seeds you crave, the yeasts in your starter that vary in every house – all will create a very individual and personal result. There is no right and wrong way of doing it. There’s just your bread and other people’s breads.

I love my bread making ritual, but I’m lazy too. So I was really happy to find a recipe that requires only little kneading. When I started my bread journey at the age of 15 (with long pauses in between) teachers in the shape of knowledgable mothers of school mates insisted that the bread had to be kneaded for at least an hour ( … by hand). More kneading means more stretching of the gluten in the dough, which develops the chewy crumb we all love. And I admit I have never had better bread than theirs. But I think you can create decent homemade bread with less effort and I really feel the wonderful taste of those breads mostly had to do with the care these loving women put into making the loaves, as well as the long fermentation time. Not to forget the fact that industrial bread mixes had invaded even the smallest bakeries in Austria at the time and the taste was suffering sorely. Sourdough was some freaky old-world substance most people wanted nothing to do with. Even making yeasted breads from scratch at home was regarded as outdated and backwards.
Not so today! Just don’t let the perfectionist school within the wave of the sourdough renaissance stop you from making your bread (unless you dig it). If it turns out a little too dense, a little too sour, a little too loose … so what, you’ll eat imperfection for a week. What a refreshing alternative amidst all the perfect things we are confronted with and that are asked of us non-stop. The fact that you have helped turn a sun-fed plant into a wholesome loaf to sustain you and/or others is a lesson in gratitude and wonder in itself.

A quick note on my preferred bread

The addition of the four spices fennel, coriander, anise and caraway is a must when making Hausbrot (an ubiquitous type of bread in Austria – hence the name, which literally means “house bread” to express plainness). This tradition is inherited from the Jewish communities, who have largely shaped what we know today as Austrian food, especially in and around Vienna. I grew up with this fragrant mélange in our everyday bread, and I find that I miss it sorely when I eat lighter Italian or French breads for a couple of days. And yes, children (of the past at least, not sure about kids today) would even enjoy their butter & jam or chocolate spreads on spiced dark bread … although not exclusively, as the range of breakfast breads and pastries made from white flour is huge.
The dark colour of Hausbrot by the way does not stem from the use of whole grain flour. It is dark molasses added to the white flour, creating a richer colour and helping the yeast along. Molasses help in the rising of sourdough too, so I add it sometimes when I crave a maltier taste. I also insist on whole grains at all times, which only sourdough will render completely digestible and bioavailable. The result is a denser, heavier bread, that doesn’t rise as much. I guess my recipes are only for hardcore whole grain lovers anyways 😉
That said, experiment with flours, seeds, nuts, flakes and spices to your liking. You can also choose to leave them out and make the simplest loaf from flour, salt and water (and sourdough starter). Just stick roughly to the ratios in the recipe, also known as baker’s percentage. If you want to use flakes or seeds in place of the flour, try the ratio I mention as an option in the recipe.

I’d love to hear what your favourite bread is made from!

You can easily double this recipe and make two loaves. Bread freezes well, so you can make some ahead if you don’t have time to bake every week or have a large / very hungry crowd to feed – or if you just love eating bread. 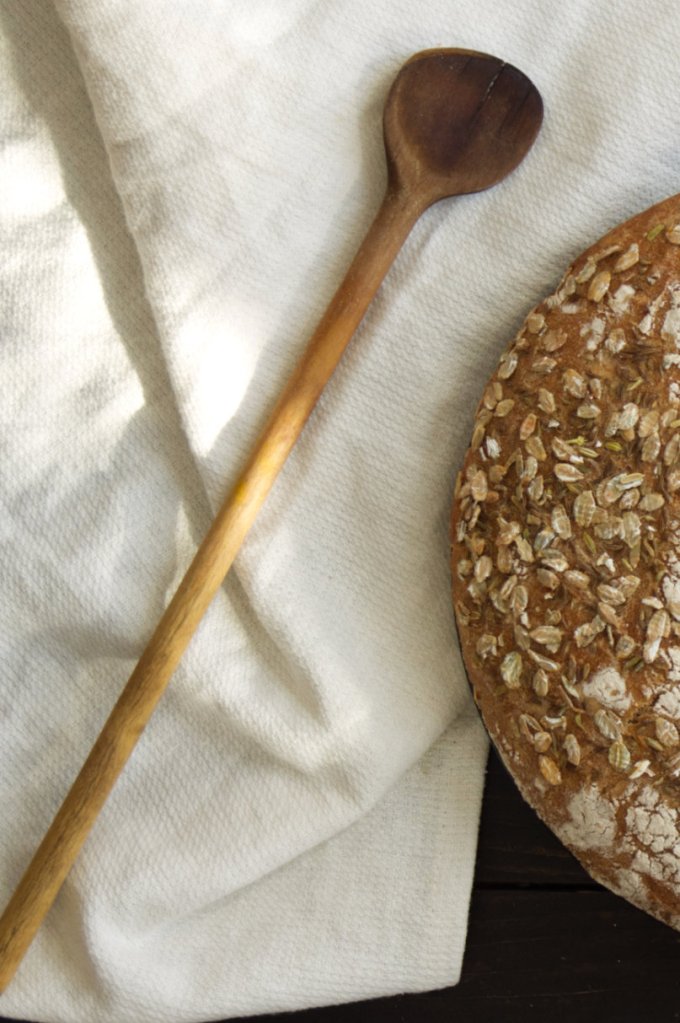 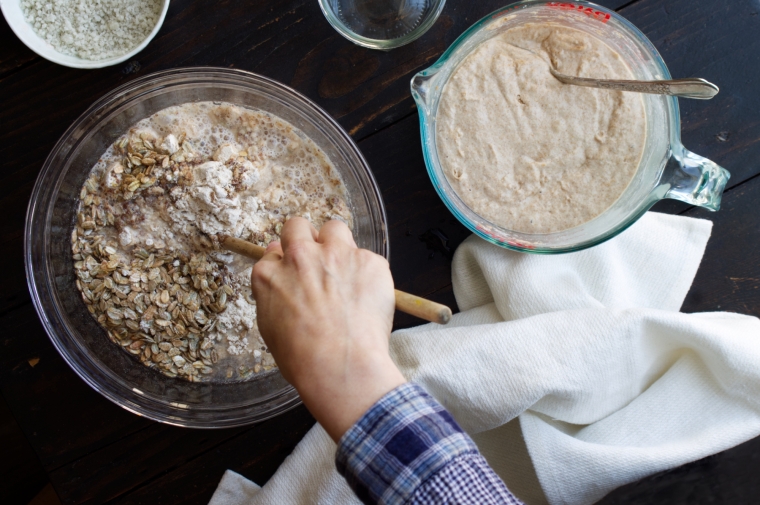 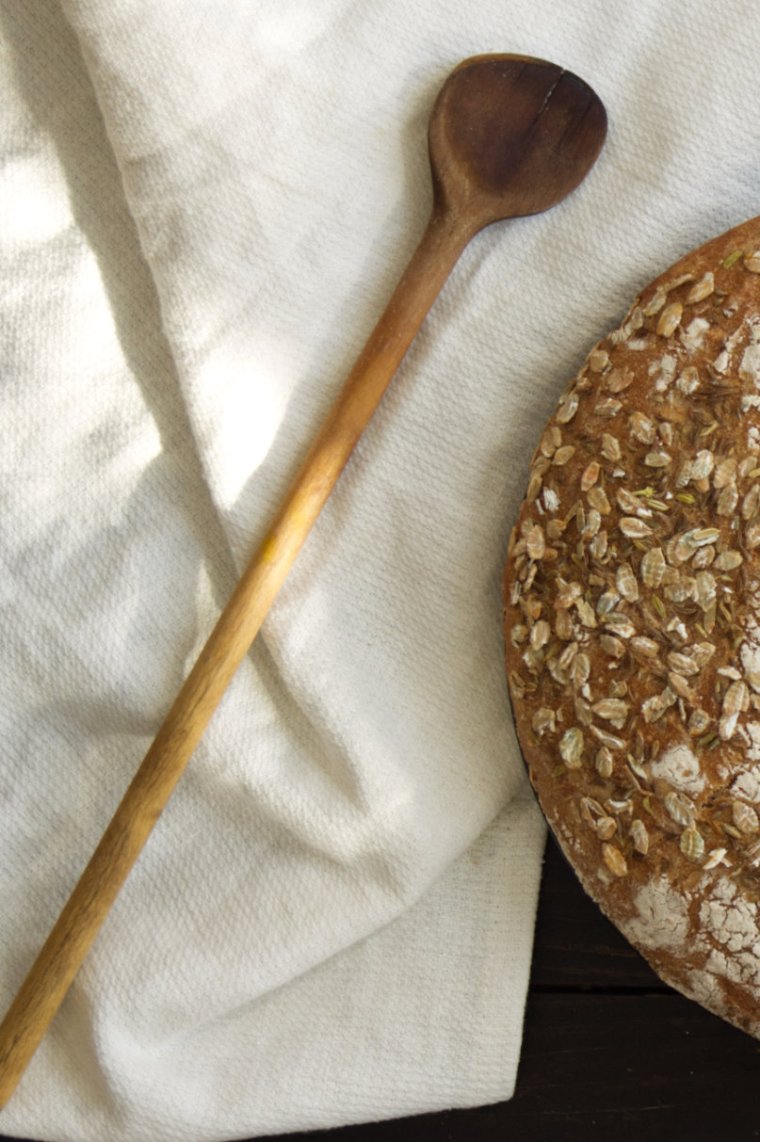 In this space I savor seasonal recipes, celebrate the spirit and lore of food and delve into the magic of everyday. I honor what sustains us by sharing its beauty through cooking, painting and writing.

Recently on the blog